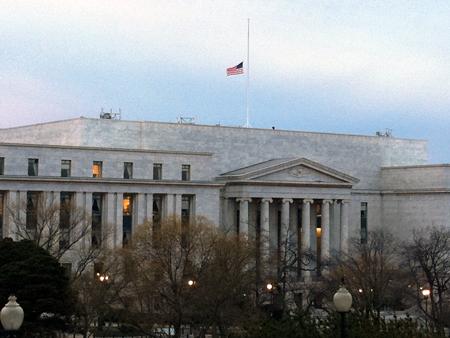 Alaska’s Congressman Don Young is not changing any security protocol or plans this week in the wake of Saturday’s shooting of his colleague, Congresswoman Gabrielle Giffords of Arizona.  The Tucson-area Democrat was shot in the head at a “Congress on Your Corner” event she was hosting to meet with constituents.  Six people were killed and 14 wounded, including Giffords, who is in critical condition.  22-year-old suspect Jared Loughner is in custody and will appear in court today.

Now some members of Congress are stepping up security or asking questions about how to better protect themselves, their staffers, and their families.

Alaska’s delegation members do not have security details.  When former-Senator Ted Stevens served as Senate Pro Tem, the highest ranking senator and third in line to the presidency, he had standard federally-provided security.

Senator Lisa Murkowski says she treasures feeling safe and at home in Alaska, but that Saturday’s attack is a reality-check for those in office.

This is a situation that should cause us all to be exceptionally aware of the public positions that we hold, that we’re out amongst the public, and there are individuals out there that for whatever reason, whether they are mentally unstable, or extraordinarily angry people who do not know how to control their anger appropriately, that there are those out there who will target public figures.

Murkowski points out that federal judges are provided protection for their security, and says she hates to think things could get to a point where members of Congress would require protection from those they represent.

Murkowski says she’s mourning the lives of those lost in what she called a “senseless and tragic act of violence.”

Democratic Senator Mark Begich put out a statement Saturday calling the shooting “horrifying” and said “it’s a sad day in our country when a public servant and her constituents cannot gather to discuss important issues without the fear of violence.”

Congressman Young did not initially release a statement, but when contacted, his office issued comments in which he condemned the attack and said he’s praying for the victims and their families.

Some have called for a ramping-down of rhetoric that uses violent images or words.

Former Alaska Governor Sarah Palin has been scrutinized this weekend for an ad her Political Action Committee created last year that showed a map with Congressional districts, including Giffords’, marked in the crosshairs of a rifle sight.

Last year in an interview with MSNBC, Congresswoman Giffords said heated rhetoric had led to violent threats against her and vandalism at her office.  She referred to the Palin map as part of the problem.

No link has been made between the alleged shooter and Palin’s politics.

A Palin spokeswoman defended the former governor in an interview on a conservative talk show, saying the cross hairs were actually “surveyors symbols.”

Palin has stayed quiet other than to offer condolences to victims’ families on Facebook.

Senator Murkowski says it’s not fair to single out one person, like Sarah Palin, for being responsible for the angry political climate. But, she says everyone in leadership needs to be aware of the power of their words.

Photo: Flags are flying at half-staff at the office buildings of the U.S. House of Representatives in honor of Rep. Gabrielle Giffords and the other victims of Saturday’s shooting in Tucson.

After allegations against manager, Gross campaign says it has ‘gold standard’ harassment policy