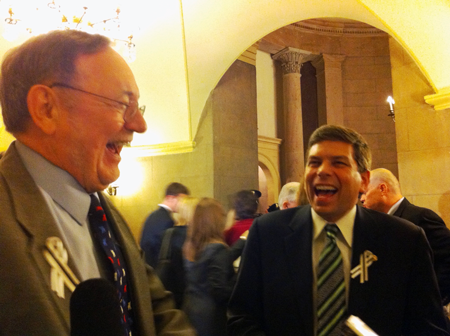 Alaska’s Democratic Senator and Republican Congressman sat together at last night’s State of the Union address, and found they had much in common in their reaction as Alaskans, despite their party differences.

Senator Mark Begich and Congressman Don Young agreed on several points, including dismay at the President’s call to boost taxes on oil companies, and approval at proposed clean energy standards and trimming of bureaucracy.

President Obama called for dramatically boosting clean energy in America.  The President said he wants to see 1 million electric vehicles on the road in four years, funded by reducing tax breaks for oil companies.  After the speech, Senator Begich and Congressman Young said they were not among those cheering for that line.

Begich said they did appreciate the call for clean energy – especially natural gas.

Senator Lisa Murkowski had to leave the Capitol before the speech started because her younger son was rushed to the hospital with appendicitis.  This morning, she said his surgery was successful, and that she caught most of the President’s speech on radio and TV.

Murkowski says while she approves of setting clean energy goals – rather than renewable energy standards – she wants to hear more about the Administration’s plans.

This was Congressman Young’s first State of the Union in decades.  He saved Begich a seat, since the Senator came into the chamber as part of the Democratic leadership team escort of President Obama.

Young typically skips the State of the Union, but says he went since so many Democratic friends encouraged him to attend.

Photo: Rep. Don Young and Sen. Mark Begich share a laugh after the State of the Union address at Young’s observation that he was in high demand as a seatmate after 37 years of skipping the speech. The two Alaskans sat together and agreed on some of the speech’s highs and lows.