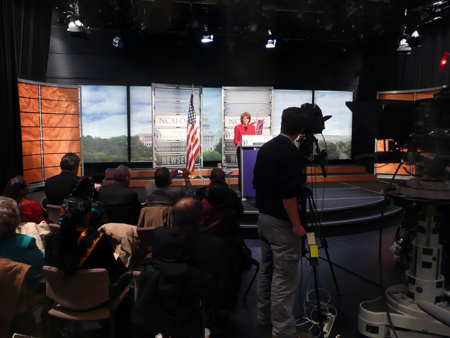 The President of the country’s largest group representing Alaska Natives and American Indians says they have fresh momentum, and are at the dawn of a new era.

Jefferson Keel, president of the National Congress of American Indians, gave the annual “State of the Indian Nations” address Thursday, which traditionally comes on the heels of the U.S. President’s State of the Union speech.

Keel says last year was marked by huge leaps forward in policies that will help Native Americans, from passage of the Tribal Law and Order Act to the permanent reauthorization of the Indian Health Care Improvement Act, to the long-awaited settlement of the Cobell case over the federal government’s mishandling of billions of dollars in Indian trust funds.

Keel says tribes hold “unrealized potential” in areas like energy, since they’re stewards for 10 percent of the country’s energy resources, but only a handful of tribes have been able to use them.

He says they’re hampered by federal bureaucracy and lack of access to programs and funding.

Alaska Republican Senator Lisa Murkowski gave the Congressional response this morning to Keel’s “State of Indian Nations” address, and warned tribal leaders that it will be a battle to get adequate funding for Alaska Native and American Indian programs in these tight budget times.

Some new conservative House members ran on platforms of funding only what’s mandated by the Constitution. But Murkowski says the federal responsibility for the well being of Native people is in the Constitution.