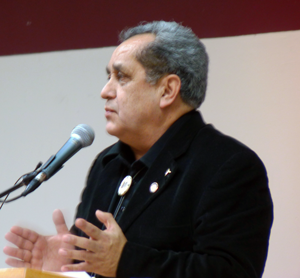 Senator Albert Kookesh is among those expecting reapportionment to eliminate districts that primarily represent villages and small cities.

The Angoon Democrat addressed regional and statewide leaders during Juneau’s Native Issues Forum on Thursday (Feb. 10). He said he worries that the panel redesigning House and Senate district boundaries will not be sympathetic.

“Not to be partisan, but there are no Democrats on that list. Four Republicans, one non-partisan. Four non-Natives, one Native. You can’t blame me for being a little bit paranoid,” he says.

Alaska’s redistricting board will soon get new census numbers and use them to set district lines. Data already in hand shows urban growth and rural decline.

Kookesh says high fuel and power costs and limited school offerings are sending more villagers into cities. He expects that to mean his district, stretching from Southeast into Western Alaska, will be absorbed into nearby districts.

He says that will end his almost 16-year legislative career.

“If that’s what happens, it’s time for me to ride off into the sunset and say goodbye to everybody. I appreciate that, but I just feel bad that the diversity of opinion in the Legislature changes dramatically when you lose representatives from rural Alaska who are Alaska Native,” he says.

He says residents of his and other rural districts need to think about how they can maintain power in the Legislature. In addition to his Senate seat, Kookesh co-chairs the Alaska Federation of Natives board and chairs the Sealaska Corporation board.’