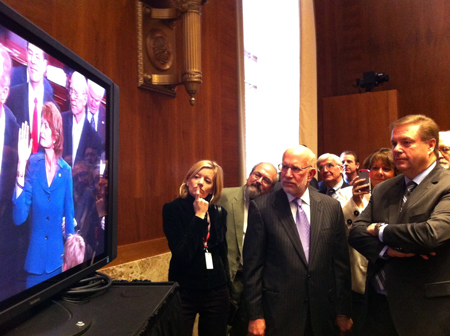 Two-thirds of Alaska’s Congressional delegation was sworn in for new terms today.

Republicans Senator Lisa Murkowski and Congressman Don Young each took the oath of office in their respective chambers. Senator Murkowski made history by being the senate’s first successful write-in candidate in more than 50 years, a fact not lost on her supporters Wednesday.

Photos: (Top) Murkowski supporters, friends, and staffers cheer as she is sworn in on the Senate floor. They watched on TV in a nearby Senate room.    (Right)  Supporters and staffers of Senator Murkowski watched her take the oath of office via TV from the Dirksen Senate Building, in the Energy Committee hearing room.