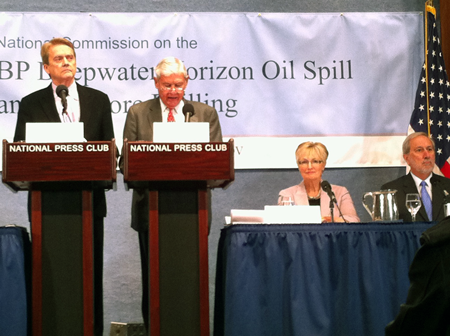 “Both government and industry must make dramatic changes.” Those are the words being used by a Presidential Commission investigating the Deepwater Horizon blowout, in its recommendations this morning. The report says the federal government needs to beef up its oversight of offshore drilling, and should assure that future drilling in the Arctic is done safely.   Commission member Fran Ulmer of Alaska says whether it is deep or shallow water, safety can lose its priority in the many separate risk calculations the industry makes as it decides how to drill.

It’s not clear what sort of reception the Commission report will get.  The industry is saying it is already taking the necessary steps to correct its procedures.  The Commission was given a tight deadline and Congress never gave it subpoena power.  Ulmer says the lack of the ability to take sworn testimony prevented them from getting definitive answers to some basic questions, such as the reason for repeated changes of plans, and an explanation for why a critical test was signed off on.

Photo by Libby Casey, APRN – Washington DC: Co-chairs William Reilly and Sen. Bob Graham spoke from the podium, alongside commissioners Fran Ulmer and Dan Boesch. Ulmer is chancellor of the University of Alaska Anchorage and addressed concerns about Arctic exploration.

The Trump administration is moving to sell leases in ANWR, but will anyone show up for a sale?