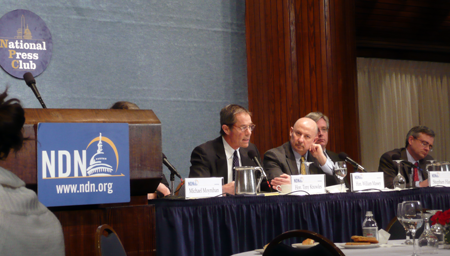 President Obama’s goal of boosting clean energy in the U.S. over the next 20 years should be welcome news in Alaska, according to former Governor Tony Knowles.  Knowles is now president of the National Energy Policy Institute, a non-partisan, non-profit organization that researches energy policy and is based in Tulsa, Oklahoma.

President Obama said in last week’s State of the Union address that he wants to see the nation using 80 percent clean energy by the year 2035.  That includes natural gas – and controversial forms of energy like clean coal and nuclear.  It basically counts all types of energy except traditional coal.

Knowles says including gas in the equation could help Alaska’s natural gas find a market despite competition from shale and other gas hubs closer to market.  The National Energy Policy Institute came up with some models of how the country could hit the President’s goals.

Knowles was in Washington DC Monday at a luncheon about energy issues that featured the Chairman of the Senate Energy Committee, Jeff Bingaman of New Mexico.  Bingaman has supported renewable energy focused more on wind and solar power.  But, Monday, he said he’ll back the President’s clean energy goals including gas and nuclear energy, as long as it still has incentives specifically for renewable projects.