Dog teams moved swiftly down the Yukon River all Friday afternoon. Many came off an eight-hour rest, but some mushers chose to push their teams before taking the mandatory break on the river. KNOM’s Emily Schwing reports.

It was just before noon as Brent Sass’s dog team sped through the Galena checkpoint without picking up straw, grabbing only his drop bags. Sass also didn’t take any extra dog food with him, which means he probably didn’t plan to camp on his way to Nulato.

But he did take some human food with him: a bag of chocolate chip cookies, another bag of candy and few small bits of gear. 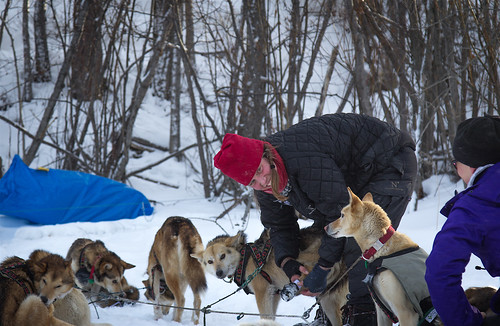 The thick layer of clouds that blanketed the town all morning was just burning off as Sass scrambled through Galena. The weather system dropped a couple inches of snow on the river overnight.

“That was fun, padding for the dogs,” said Sass.

“They’re wonderful, they’re eating like crazy, I’ve got no complaints. I’ve got 14 strong pulling dogs, so I am a happy man at the moment,” said Sass.

As Sass sped past, Aliy Zirkle’s dogs barely lifted their heads. They arrived an hour earlier and were snuggled in for their mandatory eight-hour rest after a long, hard push from Takotna.

“I don’t know how many people and maybe not my team could do the run I just did. That’s a bold move with little rest,” said Zirkle.

Zirkle’s team rested only six hours in a day and a half long run to Galena.

“Well you only know what you do after. We’ll see whether I’m picking up the pieces or not,” said Zirkle.

Zirkle says this was her big move. A reroute due to open water on the river means what is traditionally a 37 mile run to Nulato has now been extended by roughly 20 miles overland. But she says her effort might have given her an advantage.

“We’ll see what [the dogs] look like. An eight-hour rest is a long rest and now it’s interesting. It’s now a 58 instead of a short little run. Actually, that’s in my favor, because I’m sitting here eight [hours]. And I kind of think I’m gonna just skip through the checkpoints now, I kind of don’t want to do another long run, because I don’t want to take all their speed away.”

As Zirkle pondered her next step in the mid afternoon, mushers who opted to take their eight hour layovers earlier in the morning in Ruby were just starting to hit the trail. Pete Kaiser says a tough run gave him a reason to stop.

But perhaps his stop in Ruby had more to do with how tired he was.

“I smashed my nose on my handlebar three times this morning falling asleep, that felt good,” said Kaiser.

Pete Kaiser wasn’t the only musher to appear tired. Michelle Phillips also says she stopped because her dogs needed rest, but she seemed pretty trail-worn herself.

“It’s changing so much. It used to be a good trail was something different than it is now. The trail now is a little bit of snow that you travel on, bouncing along crashing into things,” said Phillips.

She says she opted to take eight hours, because it would put her on a better schedule.

“Yeah, I just did a long run so it sets me up and I’ll be on a good schedule. I don’t want to be running in the heat of the day. Right now it’s 7:30, I stay here eight hours, I’ll be leaving at 3:30 when it starts getting cooler,” said Phillips.

But some mushers weren’t quite ready to stay for eight hours.

Joar Leifseth Ulsom stopped for only four hours – long enough to get a meal into his dogs.

“The dogs are doing good, so I figure I can save it for a little bit,” said Ulsom.

He says he’s been holding his team back, but with river miles ahead, it’s time to let up on the brake.

“I just gotta try and follow my plan and see how the team looks. We still gotta go up the whole Yukon river, so maybe if we’ve got some juice in Kaltag we can do something, but there’s a lot of nice dog teams here,” said Ulsom.

As teams wind their way down the Yukon, mushers will start to find out how the rest they have built up in the first half of the race translates to speed.