It’s been a week of racing for mushers in the Iditarod, and those in the middle of the pack are struggling. Though, it’s for a variety of different reasons. As Alaska Public Media’s Zachariah Hughes reports, for some the difficulty is the race itself, but for others it’s the challenges inside the lives they’re away from while out on the trail.

In the bright mid-day sun, Jason Mackey is trying to fit someone else’s discarded green runners onto his sled.

“And I didn’t send plastic here. I don’t have anything ’til I get to the coast, so I’m rummaging through the garbage pile,” said Mackey.

With a cigarette clamped at the side of his mouth, Mackey is frustrated to find himself in the middle of the pack arriving into Galena. 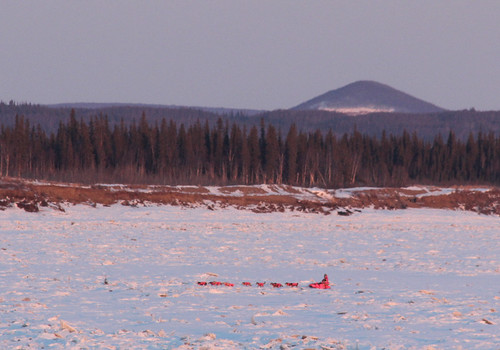 Now, that seems like wishful thinking. Nothing’s gone particularly wrong for Mackey, but he never trained his dogs for a race where everyone seems to be pushing at a record-setting tempo.

“It’s unbelievable the pace that’s being set, and is continuing to be set right across. I’ve said for the last few years, this thing’s turning into a long-distance sprint race,” said Mackey.

In spite of what feels like an aggressive schedule, Mackey feels like he’s continually getting passed, and so is cutting his rests a little shorter.

“I mean, I don’t know what else to do. Come to 50th? With that being said, man, I gotta get to boogying,” said Mackey.

At this point he puts his full attention toward the sled.

Another musher finding the field more competitive than expected is rookie Cody Strathe, who arrived 29th into Galena.

Strathe was hoping to be rookie of the year, but there’s a strong Norwegian, Gier Hjelvik, staying stubbornly ahead of him.


“I’ve never seen that person, but they’re ahead of me, they have been the whole time,” said Strathe.

For others, the biggest challenge in this middle chunk of the trail is the physical toll it starts taking. That’s especially true for Karin Hendrickson, who was hit by a car in 2014 during fall training, and is still recovering.

“I have to stay on top of the pain medication, which is hard because it’s starting to make me throw up, so I’m dealing with that a little bit. But if I don’t take it then it gets to the point where I’m really not that functional. So I’m just sort of balancing a few different things for me, physically,” said Hendrickson.


Hendrickson is running a team with just two dogs that have ever been to Nome before, and her goal is just getting the others trained up. She’s treating this as a year to rebuild and recuperate, even if that means moving over a thousand cold and icy miles with very little rest.

That’s the case for DeeDee Jonrowe, as well. She’s not physically recuperating, but using the focus and solitude of the trail to recover from a year in which her mother passed just a month after her home burned to the ground during the Sockeye fire.

Jonrowe is having trouble fixing a runner, and gets a little help from Tore Albrigtsen, who’s camping next to her.

She is exhausted and hungry, but signs autographs and chats amicably in spite of it. She didn’t train to compete for a top spot this year, just be alone with her dogs to clear her head.

“I’ve struggled plenty, I know how to struggle,” said Jonrowe.

Reporter: “So this is easy then?”

“Compared to what I’ve been through the last few years, this is a piece of cake,” said Jonrowe.

And with that, Jonrowe heads off to try and dry her large pink coat in a boiler room.