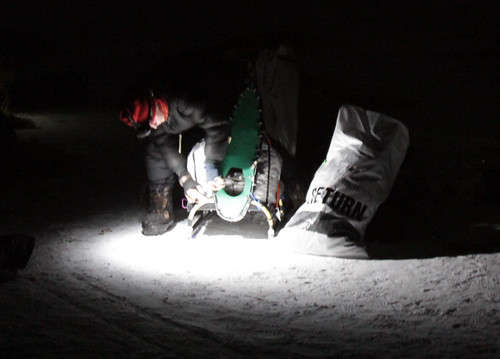 One of the biggest upsets in the final dash to finish this year’s Iditarod is the sudden disappearance of Brent Sass from the top standings.

The Eureka musher and Yukon Quest winner spent most of the race near the front of the pack. But as he was preparing to leave White Mountain Monday evening, Sass’s dogs refused to run. After about a half-hour of trying to coax them onto the trail, Sass turned them back to the checkpoint, and let them rest overnight.

Shortly after 1 p.m., more than 17 hours after Sass was cleared to leave the checkpoint, he started getting his dogs ready.

“It’s in their head. They don’t want to run any more,” Sass said. “It was my responsibility to control that. And I obviously didn’t. Sorry guys.”

Sass had his dogs ready to go right as his 8-hour rest ended in White Mountain, but they wouldn’t budge.

For more than a half-hour he walked up and down the line trying to coax his leaders into a trot, but to no avail.

Eventually he brought the team back to the checkpoint on the frozen northern bank of the Fish River, re-arranging the piles of straw they’d left not long before.

Nothing like this has happened to Sass in his racing career, and he wasn’t sure what to do.

“It’s a pretty hard pill to swallow at the moment,” he said. “Such is life. When you push things a little too far, this is what happens.”

He says this protest is the result of running an aggressive race, especially along the last two legs on the way to White Mountain.

“I pushed ‘em too hard. Bottom line,” Sass said. “Ya know, last night I debated about camping before I came into here, and probably should have—well, definitely should have. No probably involved in that. I feel horrible about it. It’s totally my fault.”

After he’d seen to his dogs, Sass headed back to a building near the checkpoint. A few hours later, Aliy Zirkle, who came into White Mountain in fourth place, was the third to leave.