John Suter had an extraordinary discrimination case with the Alaska State Commission for Human Rights. It took the agency five years to investigate his case.

ASCHR is the state’s anti-discrimination agency. In 2011, a legislative audit found that the agency wasn’t doing its job.

But amid complaints to the governor’s office and a new director with no legal experience, the commission is trying to move forward.

For the first time in nearly 30 years, the commission is under a new director, Marti Buscaglia.

It’s a big career shift for Buscaglia whose background is in newspaper publishing, mostly in Minnesota.

Her resume doesn’t list any law or civil rights experience. Both were required in the application. She said she was confused when they called for an interview.

“I said, I am not a lawyer, and the person that holds the position now is a lawyer,” Buscaglia said. “Why are you interviewing me? And they told me it was because they were really looking for management skills than legal experience.”

She said she didn’t ask why.

Buscaglia said she prepared for the job by reading the state’s human rights law and a lot of Googling.

In 2009, Suter along with legal officials from the Anchorage NAACP chapter urged for an audit on the agency.

Donna Brooks was a part of the NAACP’s legal team, and wrote some of the letters. She still works with them today.

She said at the time, a lot of people came to her about issues they were having with their cases at the human rights commission.

She summed up the problem in five words: “Delayed justice is denied justice.”

“Evidence goes stale, people start forgetting, and you cannot prove a case when you don’t have the memories of what happened (a) long time ago,” Buscaglia said.

In 2011, after two years of requests, auditors working for a committee of the Alaska Legislature published a highly critical report. It examined cases from 2008 through 2010.

Buscaglia said she read the first week on the job. 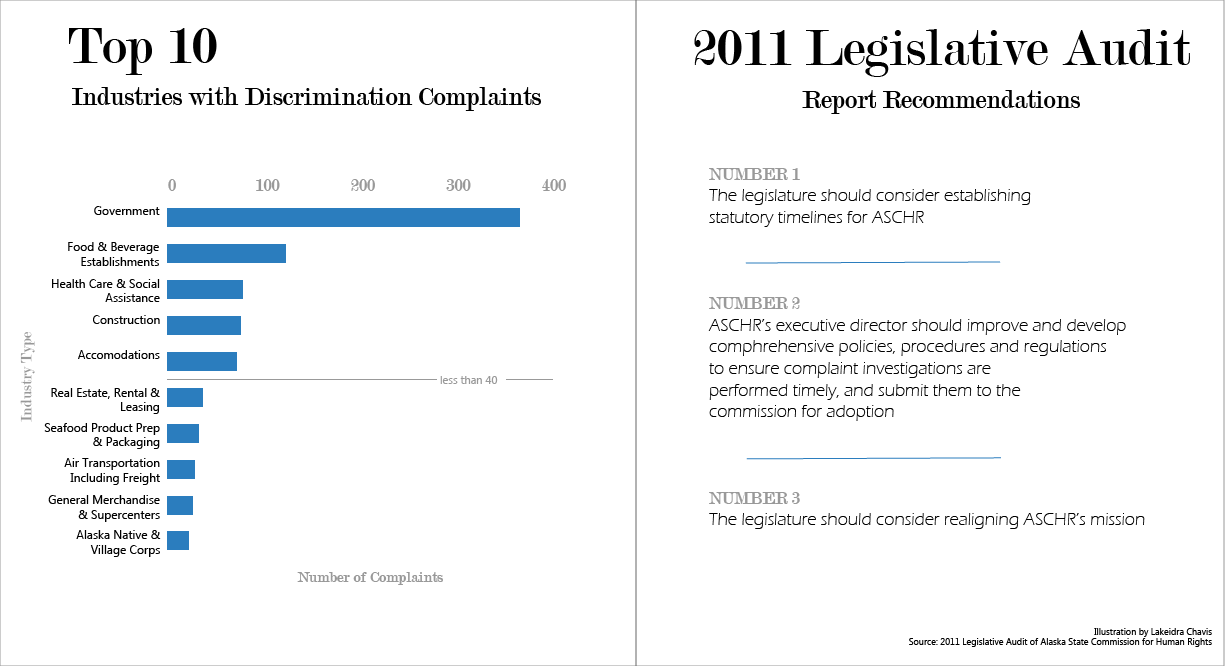 The audit found that most of the complaints the agency investigated were against the state government. The investigations took more than a year on average, according to the report, and more than half of these types of cases came back with “no substantial evidence” — NSE — to prove discrimination.

“It’s unfortunate that they can’t all be done as quickly as we’d like, but we’re definitely working towards that and I agree with you, that we shouldn’t be waiting three years to say that a case is NSE,” Buscaglia said.

She said she thinks the report didn’t fully understand the agency and that one of the recommendations, to create statutory deadlines, was unreasonable.

“Some are very simple and can be closed in a matter of weeks, but others are very complicated and can go on for a lengthy period of time,” she said. “But I did think the recommendations overall, were actually pretty sound. You know, they wanted better timeliness.”

According to the audit, about 5 percent of ASCHR investigations take three-plus years to complete. Buscaglia acknowledges that is too long.

The audit also highlighted the lack of resources for the agency’s investigators.

Investigators were only allowed to use work email within the office, they couldn’t email complainants. Any correspondence with them had to be sent using snail mail.

The office also had limited internet access, and investigators used a shared computer to access it. Former employees said the restrictions were imposed by the commission’s former director for security reasons.

The report said the agency lacked accountability and wasn’t fulfilling its mission. It recommended the legislature write a new one. It didn’t.

“Frankly, I wasn’t given any list of complaints when I went to work there,” she said. “The current staff — some people have been there a long, long time — they seem to be very happy employees. I didn’t really walk into what I consider a bad situation. I walked into what I feel is a well-run agency.” 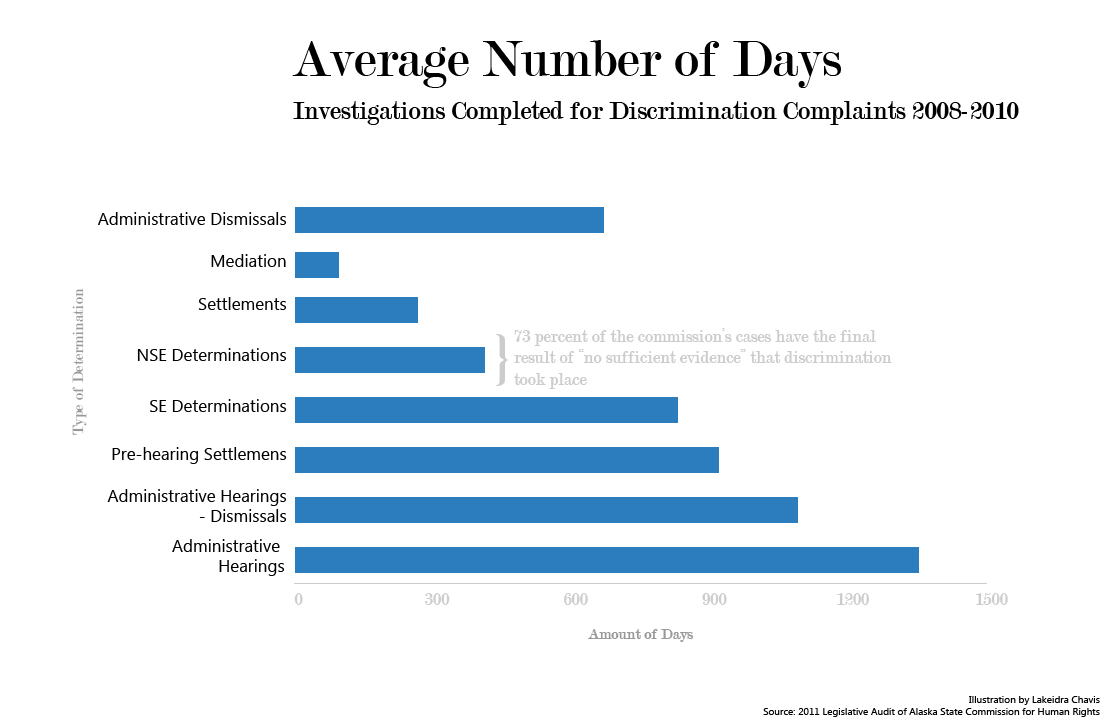 Between 2005 and 2010, the Alaska Ombudsman’s office, the state agency that handles complaints against the government, received nearly 20 complaints regarding ASCHR.

According to the report, the majority were about the timeliness of its investigations. But the ombudsman’s office couldn’t investigate them because the cases were still open with ASCHR.

But Buscaglia focuses on moving the agency forward. Starting a few months ago, she allowed investigators to send and receive case documents to complainants through email.

The commission hasn’t been investigating discrimination cases based on sexuality, gender expression or gender identity, federally protected classes. Buscalgia said the legislature must make the change. She said she’s actively working toward that.

She’s planning on traveling to Ketchikan soon for outreach — one of the major criticisms of the audit was that ASCHR was no more than a “simple complaint taking agency.”

Brooks said she believes in the agency’s intent.

“I’d like to see the human rights (commission) take on a more friendly approach to their cases, (both) professional and legal, and no backlog cases if they possibly can,” she said.

These days, Buscaglia said the agency has no more than 20 cases in its backlog and that none are older than two years. She said she hopes they’ll close all of them by the end of the year.

A tidal energy project could power machinery at Port MacKenzie