In the 1970s and early 80s people flooded Alaska looking for work in the oil industry and other fields. Now, 40 years later, many are still here. Instead of fleeing to warmer weather, Alaskans are aging in Alaska. For the past seven years, we’ve had the fastest growing senior population in the country. With it comes wisdom, economic growth, and a different set of needs. Can our state handle it?

“Hi Gay!” Tom Russell called to his friend at the senior center in Wasilla.

“If it wasn’t for my good friends, like these ladies,” he said, gesturing to the women who settled down across from him, “I wouldn’t stick around.”

Russell didn’t mean he would leave Alaska – that’s preposterous. He meant he would just check out other senior centers in the area. For Russell, Alaska is home. He moved up nearly 40 years ago, and he’s here for the long haul.

“There’s no other place to fish than Alaska. But don’t tell anybody that. I don’t want them to catch my fish, see,” he said, chuckling.

As we talked he pulled out photos of his son and fish they caught together last summer. He spends a lot of time in his boat with family members, though now his son drives instead of him. Russell is slowing down some, but not much. He still lives alone and looks out for himself.

Like many people in Alaska, Russell is staying in his house as long as he can. And here, that’s actually more feasible than elsewhere in the country.

“All the other states wish they were in our spot because more people want to…stay in their homes and stay in their communities than live in an institution,” Ripley said. “And usually, it’s more cost-effective. And it usually provides greater quality of life and provides better outcomes for older adults.”

But that doesn’t mean older people can get all of their needs met right away. In the Mat-Su Valley, the population of people who are 65 and older is growing quickly but funding for services isn’t. There’s a shortage of primary care providers who take Medicare. Transportation options are lacking. Waiting lists for housing can range from 6 to 18 months. Similar problems exist statewide.

Derrick Pennington, the program director for the Aging and Disability Resource Center in Wasilla, said people who have an emergency are often left in a bind. 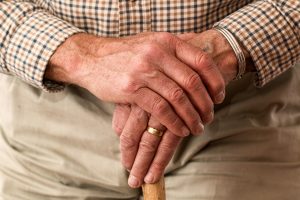 “Well, I love my apartment because I’m on the top floor, and I’ve got a beautiful view,” she said effusively. “People — we must have the best building and the people on that top floor, they’re wonderful.”“So if something happens and you need the service now, it generally is not available.”

There are no easy solutions for these issues, Pennington said, and organizations need to start collaborating now to fill in the gaps.

“We kinda gotta choose how we’re gonna pay. Either we can pay for transportation and housing and fighting social isolation, or we’re gonna all pay with higher Medicaid bills and more assisted living and all these other costs associated with that,” he explained.

Some of the services that are already in place do seem to be working for those who can access them.

Back at the senior center, Gay Scott said aging in Alaska has been easy – her family helped her when she lived alone and now she’s in senior center housing.

They get together for Bible study sessions and ice cream socials. They can go to the community center to work out and eat lunch. She has a good social circle – no one she knows has considered leaving the state.

For Scott it’s simple: “Getting old is fun.”

For the next few weeks on the Solutions Desk, we’ll be exploring things that make aging fun – and feasible – in Alaska. Want to make sure you catch all of the Solutions Desk stories? Subscribe to the podcast on iTunes, Stitcher, Google Play, or NPR.