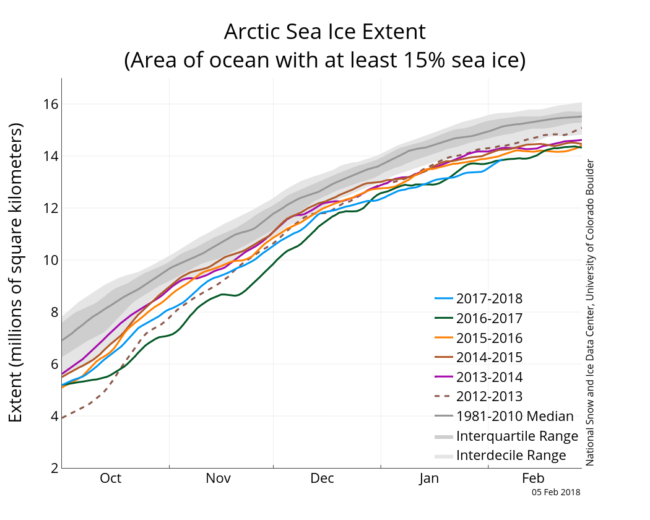 Sea ice extent is near record low levels in the Arctic ocean and that has implications for weather patterns around the globe.

Brian Brettschneider says that in the past climate models have struggled to connect ocean conditions with what happens in the atmosphere. But he says two new studies (you can find here and here) do a much better job describing that link.

Brettschneider says what happens in one, really drives the other.

What we’re learning is that the reduction of sea ice is affecting the flow of the atmosphere. And we see the response is a deepening of low pressure in some areas and an increase of high pressure in other areas. That affects which direction the wind comes from and where the storm tracks are located, so lots of impacts that are more fine scale than the fact that it’s warming here, or cooling off there.

What are those specific impacts?

What we’ve come to understand is the response to this new state of the climate system is a deepening of the Aleutian low pressure system, a weakening of the Icelandic low pressure system and an increase in the Siberian high pressure system. These are semi-permanent features, they’re typically there for months at a time in the cold season and they drive the weather across the entire globe.

Why does this matter?

When we have this idea that we’re in a warming world, when we just paint that one broad brush, that’s very important over longer time scales. But understanding how these finer scale patterns are going to set up, matters more on more human time scales. We’re talking interactions that are much more complicated. And as we do more of these models and studies, we get a better idea of how things are going to change at the regional scale.