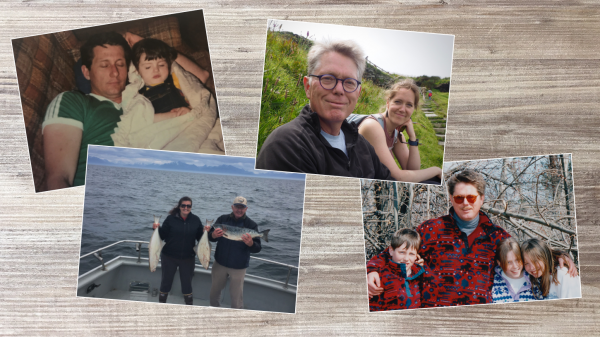 Father’s Day celebrates the dads in our lives, but for some, it’s a reminder of pain and loss.

The Dinner Party is an organization that connects people grieving the loss of a loved one. This Sunday they’re sharing stories on social media from the thousands of Dinner Partiers all over the world whose dads have died.

Kami Miller is standing in her kitchen over a bright blue pot of boiling water. She says she wants to be clear about one thing.

“I don’t fancy myself a cook,” Kami said. Instead, she said she likes to experiment.

“And usually when I experiment cooking it just means I get a bunch of stuff from the refrigerator and I put it in a pot and I see what happens,” Kami said, laughing, “But this time I’m actually following a recipe.”

The recipe is for Chicken Florentine. Kami turns to the sizzling pan on the side burner.

This is just the second time I’ve met Kami. Both meetings began with a hug.

We were first introduced over email by The Dinner Party. It’s this organization that connects people in their twenties and thirties who have experienced loss and grief.

Becca Bernstein is the The Dinner Party’s Community Organizer.

“My mom died in November 2015 and I found The Dinner Party on Thanksgiving Day in a CNN article like two weeks after she died.”

Becca hosted dinners for two years before coming on as staff.

“We’re in over 100 cities now across the world– everywhere from California to Amsterdam in the Netherlands,” Becca explained.

Becca said the group realized a lot of Dinner Partiers who’d lost someone they loved had specifically lost their dads. So on Father’s Day, they’re publishing stories on social media about some of those dads.

“At some point people stop asking and they shouldn’t stop asking,” Becca said. “Those are stories that are deep inside of you and there should be a way for those [stories] to come out.”

For Kami, a lot of those stories she has with her dad, Steve Miller, are about birds. He worked for decades as a wildlife ecologist for the Wisconsin Department of Natural Resources.

“We’d go to the marsh and just look at the ducks and the geese,” Kami said. “One time I was with him and I was like, ‘Oh my gosh, Dad,’ because he’s swerving and looking up and [saying] ‘I can hear the flock. Where are they? Oh there they are,’ and he’d swerve back around.”

Sitting around the dinner table, Kami told me about a trip to Alaska her dad took right after retirement. It was a dream trip, she said.

He came up for a whole month in the summer of 2016. Kami showed me a photo of her dad. He’s got a salmon in his hands and a smile across his face.

“He’s like, ‘I’m always the person who doesn’t catch the fish.’ There’s always that one person who it’s like, ‘Come on! Get a fish!’ And he was always that person,” Kami said, grinning. “He had never caught a fish in the ocean on a charter. He was the only one who caught a salmon on that trip. Isn’t that amazing?”

On her dad’s last night in town Kami called to see if he wanted to get dinner, to cap off the great month. He didn’t pick up, so Kami drove to where he was staying.

“I opened the door and he just looked so helpless,” Kami said. “And I think my dad is never helpless. He always has the answer. He’s always the one you call when you don’t know what to do. And he looked so fragile.”

It was sudden cardiac arrest. Kami’s dad died on Aug. 8, 2016. The next few hours were a blur, she said. The police showed up and asked if there was someone they could call.

“My emergency contact is my dad,” Kami said. “In that moment I felt so alone. Who do you call when your dad dies?”

But as the first person to find out about her dad’s death, Kami did have to make a phone call. She had to tell one of her sisters.

My conversation with Kami was different from most of the interviews I do because I’m not here just as a reporter. I was on the other end of one of those calls back in October. I remember being on the phone and saying, “No, no, no, no it can’t be.”

I took a video of my dad, Mark Russell, a week before he died. He’s wearing a white tee shirt tucked into khaki shorts. His legs look like toothpicks, but he’s smiling walking down the sidewalk in the September sunshine.

He had just been released from the hospital after having a heart attack and he thought he was in the clear. He died of sudden cardiac arrest on Oct. 1, 2017.

“It should have been 20 years from now,” I said to Kami at dinner.

“People experience the death of parents, but it shouldn’t be when you’re a teenager or when you’re in your twenties or thirties and haven’t been married, haven’t had kids, haven’t bought a house,” I said.

My dad will never see me do those things. Kami’s dad won’t either.

We talked at dinner for more three hours — about what we miss, what we remember, what we regret, and why it’s so important to keep the stories of our fathers alive even after they’re gone.

“And to our fathers,” I added.

“And to our fathers,” she agreed.

Alaska prisons to open for visitation after year-long COVID closure

Senate votes to remove Reinbold as chair of Judiciary Committee