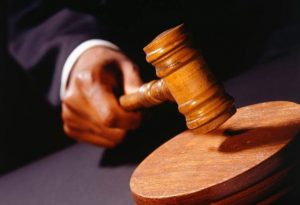 For the second time in six months, there’s a change coming in how defendants awaiting trial must post bail. As of January, many Alaskans charged with misdemeanor offenses didn’t have to post cash bail in order to be released from jail. But due to a new change in state law, this measure is being reversed.

The change in January was part of a law aimed at overhauling the state’s criminal justice system. When it came to posting bail, it took discretion away from judges.

“People were being held in custody and in jail simply because they were poor,” said Alaska Public Defender Quinlan Steiner of the original bail system. He said judges were making decisions that had little to do with whether or not people were likely to show up for their court hearings.

Then a new system was created that gives each defendant a score with two components: how likely they are to violate the conditions of release and to commit new offenses. The score is based on publicly available information, like how many times they’ve failed to appear at hearings or their number of arrests during the past five years. Those with low scores were considered low risk. Until this most recent law was signed, judges were required to release people charged with many misdemeanors without cash bail.

But that lack of judicial discretion raised concerns for police, prosecutors and, ultimately, the Legislature. It passed a new law, which Governor Bill Walker signed June 14 that said judges again can decide whether to require cash bail.

John Skidmore directs criminal prosecutions for the state of Alaska and says other states have used scores to set bail. But, “what no state did other than the state of Alaska was to make it mandatory that the risk assessment tool absolutely controlled the judge’s discretion.”

Skidmore said allowing judges discretion is essential. “There are certain people who pose a greater risk and therefore should be held in jail under greater or harsher conditions until pretrial or until they can appropriately set a reasonable bail.”

Skidmore said it’s important to make adjustments over time to what information judges can use to set bail. But he said the decision-making power should remain with the judge.

“To tie somebody’s hands, and to say it will always be one way and not the other, is just short-sighted and I don’t think is really focused on reality, which is these decisions have to be made on a case by case basis,” he said. “That’s why we have human beings as judges to make those types of decisions.”

Steiner, the public defender, said the courts must ensure that the latest change is applied in an evenhanded way, so that it doesn’t just repeat the mistakes the state made in the past.

“The key is that it be applied across the board in a similar manner,” he said.

There’s evidence that even small differences in the amount of time defendants spend in jail can increase their chances of committing new offenses, he explained.

Both Steiner and prosecutor Skidmore agree that the state should continue to assess the outcomes from the changes.