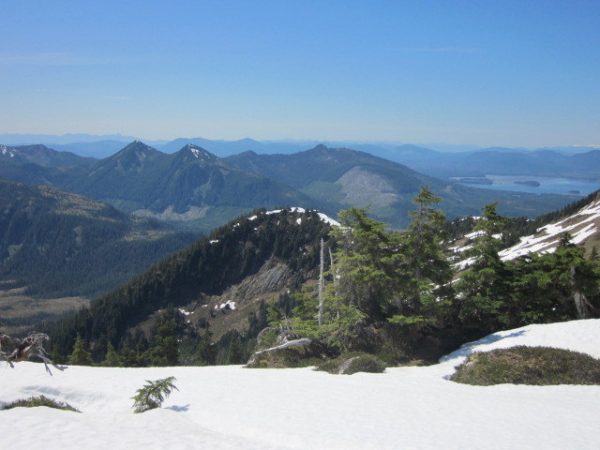 The partial government shutdown continues — 19 days and counting. It’s affecting hundreds of U.S. Forest Service workers all over Southeast Alaska. In Petersburg, most of the 75 agency workers are furloughed.

The lights are out for most of the Petersburg Ranger District. Interim District Ranger, Ted Sandhofer, is still reporting to work but he says he’s not allowed to talk to the media during the shutdown. And all Forest Service media offices are closed including at DC headquarters.

“When we’re on furlough, we’re basically not doing any of the agency’s work,” said Ken Dinsmore of Sitka. He’s the Local 251 Union President for forestry workers in Alaska and has worked for the Forest Service for decades. He represents about 200 workers in Southeast along with others throughout the state. He says the furlough doesn’t just affect federal workers but also local economies.

“Say, for example in Petersburg, 75 employees, here in Sitka, maybe 50 aren’t getting paid, you’re taking that revenue not only out of the employees hand but you’re taking it out of the community as well from what they might have spent,” Dinsmore said.

The partial shutdown means workers considered essential are on the job without pay and non-essential workers aren’t working at all. Dinsmore says there are circumstances when some employees could get called back in to work but it would be on a limited basis.

“Such as a timber sale that may be still active and needs to have the contract administered and payments made and collected, that sort of thing,” he said.

For right now though it’s a wait and see for dozens of Petersburg workers. KFSK approached several of them for their thoughts on the furlough but most wouldn’t comment. A few did.

“It’s really an uncertain time,” said Carin Christensen, a part-time employee whose husband also works for the Forest Service. “We don’t know when we’re going back to work, how it will happen, you know, how this will get resolved.”

So far, her family has been okay financially but all of that depends on how long the shutdown lasts and if the government decides to pay workers back pay afterwards.

The timing hasn’t been the worst. Winter is a low production time of year for the Forest Service. There is less field work outside and more paper work inside. But Christensen says workers are missing time to prepare for their next projects.

Another furloughed Petersburg Forest Service couple is Heath and Marina Whitacre. He’s a hydrologist and she’s a writer-editor.

Heath says they hope the furlough doesn’t last too long and really impact their finances. But he says they’re trying not to let themselves get worked up about it because they can’t change anything.

“There’s nothing we can do about the shutdown,” he said. “Just kind of letting go of that and stressing about something you can’t influence. That’s happening in Washington DC at an entirely different level. Locally, we can’t do anything about it.”

He says the shutdown will affect science-based projects that include data collection like snow surveys. Marina says hiring seasonal workers for summertime field work will be backlogged.

“We were supposed to have selections or working on it before a certain that’s already passed,” Marina said. “And I think that one week–the week we’ve been closed already–was a critical week for that.”

The Whitacres went through a previous extended shutdown in 2013, which lasted for 16 days. They received back pay after that. Heath says some people don’t understand what it’s like to be furloughed when they call it a paid vacation for the feds.

“That doesn’t feel good,” Heath said. “I want to give the people — the tax payers — their money’s worth. I want to be at work, working, if I’m getting paid. And so, that part of it doesn’t really sit well with me … but what am I going to do about that also?”

Dinsmore has been through many furloughs in the past and Forest Service workers received back pay for the time they were off. But he says this time could be different.

“I don’t see that as being any sort of a guarantee this time around,” Dinsmore said. “So, I just caution employees to not count on that.”

For now, all they can do wait on decisions being made thousands of miles away in the country’s capital.

As for the U.S. Coast Guard, they are not part of the furlough. All of Petersburg’s 27 Coast Guard employees are working without pay. They conduct search and rescue missions and aid navigation.

Anchorage’s response to homelessness has seen some success, but there’s more to do, says exiting CSS director

Bill would draw funds for Alaska schools from Permanent Fund earnings, along with PFD