For years, Fairbanks and neighboring city North Pole have had some of the worst air quality in the United States. And a major contributor to that is people burning wood in their homes to stay warm.

The area has been failing to meet a federal air quality standard since 2009, and this year is the deadline for meeting that standard. But after almost a decade of struggle, trying to get people to cut back on wood burning is still as contentious as ever.

When you look at it technically, Fairbanks’ intractable problem is actually pretty simple, according to Nick Czarnecki, the air quality manager for the Fairbanks North Star Borough.

“We know what the main contributor to the pollution is,” said Czarnecki.

The federal standard that Fairbanks can’t seem to meet is for a tiny pollution particle known as PM 2.5. And Czarnecki said that studies have shown 60-to-80 percent of the pollution that’s putting them over that standard comes from wood-burning stoves in people’s homes. Smaller contributions come from home heating oil, industrial sources like power plants, and car emissions.

But the solution isn’t easy.

According to the Environmental Protection Agency, PM 2.5 has been linked to numerous health issues, including premature death in people with heart or lung disease, aggravated asthma, and decreased lung function.

The high concentration of these particles in Fairbanks and North Pole is due in part to the fact that the area gets some of the most intense temperature inversions in the world. That means that periodically throughout the winter, there are events where the air just gets stuck close to the ground, and all the pollution layers on top of itself.

Over the years, the most controversial step the borough has taken to clean up the air is to ban wood burning on bad air quality days.

In 2015 the Borough Assembly voted to make those bans mandatory for the first time and back them with fines of up to $1,000 for repeat-violators.

Over the course of the next three winters, the borough issued several hundred warning letters, but only three citations.

But in the local election last October, voters passed a proposition that took away the borough’s power to regulate home heating devices like wood stoves and — among other things — their power to enforce burn bans. That job now falls to the state.

But the state — which had little time to budget or plan for their new responsibilities — has fewer resources for enforcement than the borough did. Plus, it doesn’t have the authority to issue fines.

Meanwhile, as the problem enters its 10th year, the emotions around it are as strong as ever.

Patrice Lee is a retired math and science teacher who’s been one of the people most outspoken over the years in trying to get the borough, state and federal governments to do more to clean up the air.

Her son’s vulnerability is what got her involved with the issue, but she said she’s concerned about the health of her community as a whole.

As we talked, Lee got a phone call from a woman she knows out in North Pole. The woman had a heart attack a number of years ago and is worried about the effects of smoke on her health. She sounded deeply frustrated as she told Lee that the smoke pollution at her property is “worse than ever.”

Lee gave her the phone number to lodge a complaint with the state, and they hung up. I asked Lee if people call her like that often.

Lee and others concerned about the health effects of poor air quality feel like they’re watching a public health crisis play out in slow motion.

It’s been almost 10 years, they say, and even though the numbers have improved, the air quality in certain areas is still far worse than the federal standard. 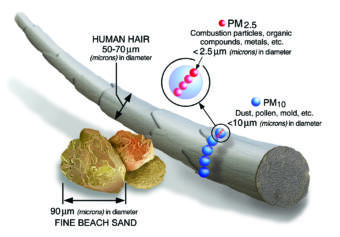 But one of the things that makes this issue tricky to solve is that for some, burning wood is its own health and safety issue.

“February last year when it got pretty cold … My fuel tank got the point where it was a matter of either, be compliant and not burn wood, or not feed the kids,” said Jesse Shadley.

Shadley came to Fairbanks with the Army and later worked for the pipeline, where he said he had great benefits and great pay. But that changed when he got divorced and became a single dad.

“Having three kids I’m raising all by myself, I just … I needed to be home more,” said Shadley.

So he left his job at the pipeline and started working as a jeweler in town.

Shadley lives on a quiet suburban street in North Pole where — on the day I visited — the temperature was 40-something below zero.

He told me that it could cost anywhere from about $250 to over $700 a month to heat his home with fuel oil if he’s not supplementing with wood.

He has a waiver for this winter that allows him to burn even during the worst air quality days. He got it because his home would suffer damage from the cold if he didn’t use the wood stove.

That waiver is also issued for homes that don’t have another adequate source of heat, or for individuals who can show financial hardship requires them to burn wood. This year, 49 people have those waivers. Another 244 people have waivers for appliances that meet borough standards for emissions, which lets them burn on days when the air quality is bad but not at its worst.

Shadley said he does his best to burn as little and as cleanly as possible, and the only way he sees this problem being fixed is if everyone does their part to cut back on burning wood.

“And there’s also some people that defiantly burn wood,” he continued, “or defiantly burn wet wood or burn improperly just as a matter of, you know, ‘You can’t tell me what to do.’”

According to the federal law that dictates the timeline for getting an area with poor air quality into attainment, Fairbanks and North Pole are supposed to have the air cleaned up by the end of this year. The average air quality for 2017, 2018, and 2019 together are supposed to meet the federal standard. But both the state and the borough say that’s not possible.

It’s not clear yet what will happen after that.

The area could be required to start reducing the pollution 5 percent each year until they get into attainment. Or the state could request an extension from the EPA, which would require them to use even more stringent measures to clean up the air.

Or eventually — if the area doesn’t show progress — the federal government could take over and come up with their own plan to get the area into attainment.

Either way, local officials say that the longer this problem drags on, the more it’s going to cost the community to fix — and the less control they’ll have.