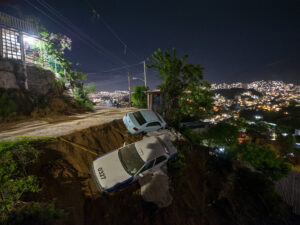 Mexicans are sharing spectacular videos of bursts of blue lights seen streaking across the skies as a strong earthquake rocked the country’s Pacific coast city of Acapulco on Wednesday.

The 7.0 magnitude quake struck some 11 miles northeast of the resort city in the southwestern state of Guerrero. At least one person was killed, buildings were damaged and rockslides littered a major highway, but the temblor didn’t cause widespread damage.

It did rattle nerves though.

The earthquake could be felt some 200 miles away in Mexico City and lasted nearly a minute. Residents fled into the streets as buildings swayed, sidewalks undulated and the blue lights burst brilliantly in the sky.

Soon users started using the hashtag Apocalipsis, Spanish for the biblical term denoting the end of the world, apocalypse.

Rutgers University physicist Troy Shinbrot says not to worry — the blue lights are not a sign of the world coming to an end.

“If it did, the apocalypse would have happened a thousand years ago when this was first discovered,” said Shinbrot. In an interview with NPR, he said the phenomenon of so-called earthquake lights has been recorded historically and occurs fairly regularly.

Some scientists believe the eruption of light, or luminosity, is caused by the friction of rock near Earth’s crust, which releases energy into the atmosphere. The flash of light is produced near the planet’s surface.

Shinbrot has tried to re-create the phenomenon in his lab and says he has measured voltage changes similar to what happens when Earth’s crust slips in an earthquake.

He urges the scientifically curious to take a roll of adhesive tape into a dark closet and quickly peel back a strip. Shinbrot says a glow of light will be emitted. But he cautions not to relate “earthquake lights,” or EQL, and the adhesive tape experiment too closely, since there is still a lot scientists don’t know.

There’s disagreement about what actually causes the flashes

The U.S. Geological Survey makes that clear on its website, stating, “Geophysicists differ on the extent to which they think that individual reports of unusual lighting near the time and epicenter of an earthquake actually represent EQL.”

He says most of what was seen in Mexico’s skies on Tuesday night following the earthquake were power flashes from swinging wires in the electricity grid hitting other lines, trees or buildings.

“If there were visible natural electrical phenomenon going on, that would have been difficult to discern alongside the bright power flashes from the electrical grid,” says Elliott.

National Autonomous University of Mexico seismologist Victor Manuel Cruz Atienza does believe in the phenomenon, but says last night’s sky was full of a lot of electrical activity from a rainstorm.

“We can’t for sure associate the earthquake with the light show we saw last night, especially given the rainstorm we were experiencing,” he told NPR. He said it was difficult for him to distinguish the difference on several videos he saw making the rounds on social media.

Cruz Atienza and Shinbrot both agree there will likely be more chances to see the blue flashes across Mexico’s skies. And many Mexicans are pointing out that most probably will happen sometime during September. That’s when many of Mexico’s greatest quakes have hit, including an 8.2 magnitude temblor that struck the state of Oaxaca four years ago on Sept. 7, 2017, and Mexico City’s destructive 8.0 quake on Sept. 19, 1985.

That got Twitter users abuzz renaming the month Septiemble, a combination of “September” and “tremble” in Spanish.