As top Iditarod teams reached the checkpoint at Galena, several were trying to account for their spots at the top of the pack. Alaska Public Media’s Zachariah Hughes spoke with three mushers surprised for one reason or another with their place in the standings.

Nicholas Petit is sorting through his sled bag pulling out frozen meat. He blazed from Ruby to Galena in five-and-a-half hours. It’s a bit of a surprise since Petit is running puppies, and says he’s just trying to get them familiar with the trail. Not win this year, but down the line. 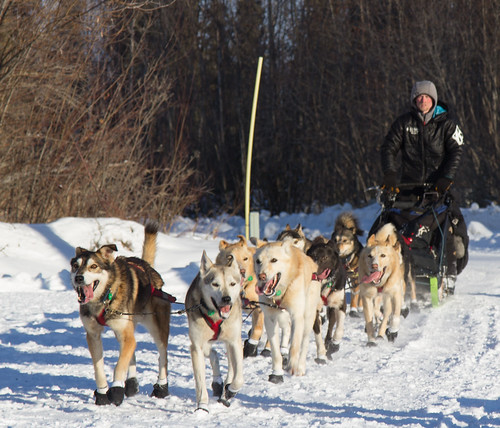 Petit’s run to Galena got a little help from the weather. He was just behind a short white-out, which left a fresh dusting of a little more than an inch of snow over sand and gravel. Right on his heels was Wade Marrs, who spent the entire leg thinking he was lagging behind. And he’s felt that way the whole race so far.

“It definitely doesn’t feel like I’m having the performance that we had last year, and we’re doing better than we did last year. So it’s kinda weird,” said Marrs.

As Marrs finished dinner before a quick nap, race veteran Aaron Burmeister dropped by his table with a few encouragements, and a little perspective.

“Thank you. I know, every time I’m like ‘they don’t look very good,’ and then I’m like thinking I’m going slow, but I’m running with Nick,” said Marrs.

“Nick is running faster than anyone in the race,” said Burmeister.

Another surprise for Marrs happened on the way to Ruby, when he fell off his sled.

Marrs says he’s mostly recovered now from a bad cold that made it hard to eat, but didn’t alter his race schedule much. Another musher recuperating from an earlier ailment is Joar Ulsom, who says he’s only now getting his appetite back.

“It definitely slowed me down in between Nikolai and Ophir,” said Ulsom.

The impediment threw off Ulsom’s race plan. But the other surprise, the bigger one, is how close together the top of the pack is clustered in a year that is proving exceptionally competitive.

“I would be super happy with another top ten, but it’s pretty hard in this company, so we’ll see what happens,” said Ulsom.

With much of the technical driving past and the strategies for taking 24 and 8 hour rests played, this stretch of the Yukon is the when the race is raced.