The last sizable timber mill in the state has struggled to find enough trees to keep the saws running. But down the road, a small mom and pop operation is thriving with a unique business model.

Alaska Specialty Woods uses salvaged trees to make instrument tops, which are shipped all around the world. But this sustainable company still wants the timber industry to stick around.

Near the end of windy gravel road, Brent Cole Jr. fires up a chainsaw.

With his dark hair piled into a bun, he runs the blade through an enormous log sitting on the ground. His brother is next to him, cutting the section into smaller and smaller chunks.

The tree they’re slicing has been dead for decades. It’s salvaged from an old logging raft that was used to transport heavy machinery in a bygone era.

This is how the family business gets its wood: from bridges no longer used on old logging roads to trees that have been blown down or are dead standing.

Cole says there are millions of acres in the Tongass National Forest, and finding these trees can be like a scavenger hunt.

“We’d always make fun of my dad because he’s been doing it for years and he’d get all excited, and we’d be like you’re such a goof ball,” Cole Jr. said with laugh. “But now we see.”

And if you spend enough time with his dad — Brent Cole Sr. — it’s obvious how that enthusiasm could rub off.

At his workshop, a few towns over from the log yard, Cole Sr. shows me a thin, blond piece of wood.

“This here’s got indented grain, and look at the loud visual energy of that!” Cole Sr. says excitedly. “You go, ‘Wow!’”

He says the trees have a story to tell. Take the logging raft, for example. It’s riddled with holes from a worm-like mollusk. Other pieces of wood have a gray tinge. The result of mineral exposure from being buried in the soil.

Cole Sr. embraces those imperfections and shapes the wood into tops for acoustic instruments, like guitars.

The workshop doesn’t have any finished guitars lying around. Cole Sr. jokes that he only plays the band saw.

So he taps on a slice of Sitka spruce to show me why it’s sought after by nearly every guitar maker. With each thwack, you can hear the wood vibrate. 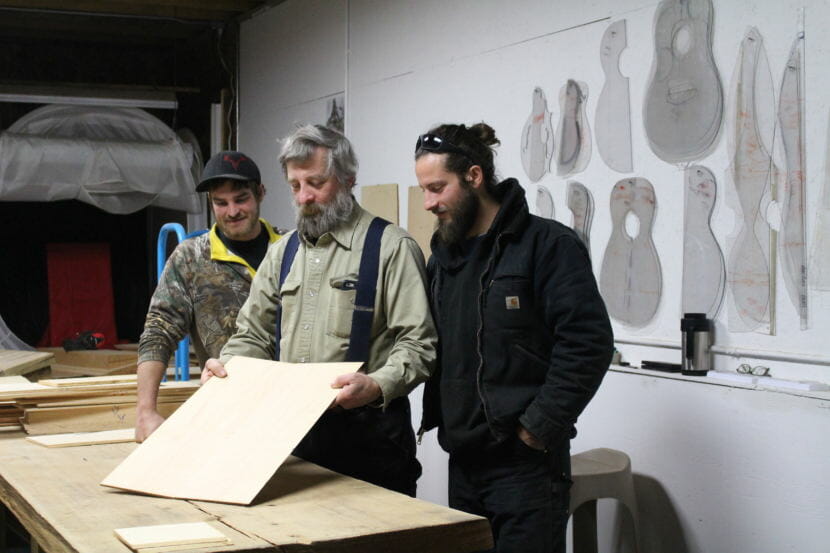 Cole Sr. used to drive trucks for a big logging company on Prince of Wales Island. Then he started his own business back in the early 90s: Alaska Specialty Woods.

At first, it was just a matter of buying whatever he could get his hands on. For a small operation, that usually meant buying individual trees from the Tongass National Forest. Most of that was salvaged. Some of it was cut down.

But in 2014, Cole Sr. says it became nearly impossible to find any living Sitka spruce that wasn’t off limits in the Tongass.

Alaska Specialty Woods now produces as many as 10,000 guitar tops a year — shipping them to 80 different countries. They have name brand customers, like Gibson Guitars.

Cole Sr. says he knows at least on the surface being the “salvage people” could look like a more eco-friendly way doing business. Especially at a time when clear cutting the big trees remains up in the air.

The U.S. Forest Service wants to end old growth logging in the Tongass National Forest. It could be the death of the larger neighboring mill. The last of it’s kind in the state.

“For us, it really behoves us — Alaska Specialty woods — and our customers, if there is an active timber industry here,” he said.

Through the years, Alaska Specialty Woods and Viking Lumber have used the same barges. They’ve flown the same helicopters to remove logs in the Tongass. Cole Sr. says if the big mill closes, that would be bad for his business.

Still, he doesn’t want to see the region return entirely to its past logging days.

“I want to see a slowdown of the amount of old growth clearcut,” Cole Sr. said. “But I also want to see a transition for a management for that.”

Which, he says, means the bigger mill should have longer to adapt.

Unlike Alaska Speciality Woods, Viking Lumber doesn’t make it’s own niche products. The company mills the wood on the island and ships the boards to the Lower 48.

Cole Sr. has invited Viking to stop by and see his operation.

In the meantime, he says he gets why people are concerned about the Tongass. But he says the economy should be able to flourish, too.

“They got good ideas and good intentions. Save the planet. But I think there’s common ground and using common sense and utilization,” he said. “And I think we can do it all.”

He doesn’t think the timber industry will ever be as big as it once was in the region.

But like his guitar tops, he says the wood in the Tongass still has a story to tell.

Wave of coronavirus infections in Cordova shuts down seafood processor