The Libertarian Party’s candidate for U.S. President wrapped up a four-city tour of Alaska Tuesday in Juneau. Along the way, Clemson University psychology lecturer Jo Jorgensen stopped by Ketchikan to advocate for smaller government.

The Libertarian Party’s presidential nominee pitched her party’s ideals to voters and business owners in Ketchikan this Labor Day.

“If you look at western states, the federal government has a big hand in the land ownership throughout the west,” Rockwood said. “What are you gonna do about that? How are you going to manage that land base?”

“Sell it? Who to?” Rockwood prodded.

She clarified that that high bidder could be the State of Alaska keeping it in public hands. Or it could be a private company founded to conserve the land. But it was her view that the federal government isn’t a good steward of its land.

More broadly, Jorgensen and the Libertarian Party say the federal government has its fingers in too many pies. She and the party emphasize private property rights with little regulation. Key to the party’s platform is the idea that market forces keep private actors in check.

Speaking to reporters later, Jorgensen said there are ways to hold polluters accountable. Smoke that drifts from a factory to a neighborhood, or waste that kills fish downstream could be dealt with the same way the police deals with people encroaching on private property.

“We look at pollution, dumping waste into the water as trespassing and you don’t get to do that,” she said.

Jorgensen also suggested that removing subsidies on both fossil fuel development and alternative energy would “level the playing field” — which she says would help address climate change.

“I would suggest that nuclear energy would come out on top if it weren’t being subsidized,” she said.

Jorgensen also pitched the idea of pulling back on the global stage — reducing the U.S. military’s footprint abroad. 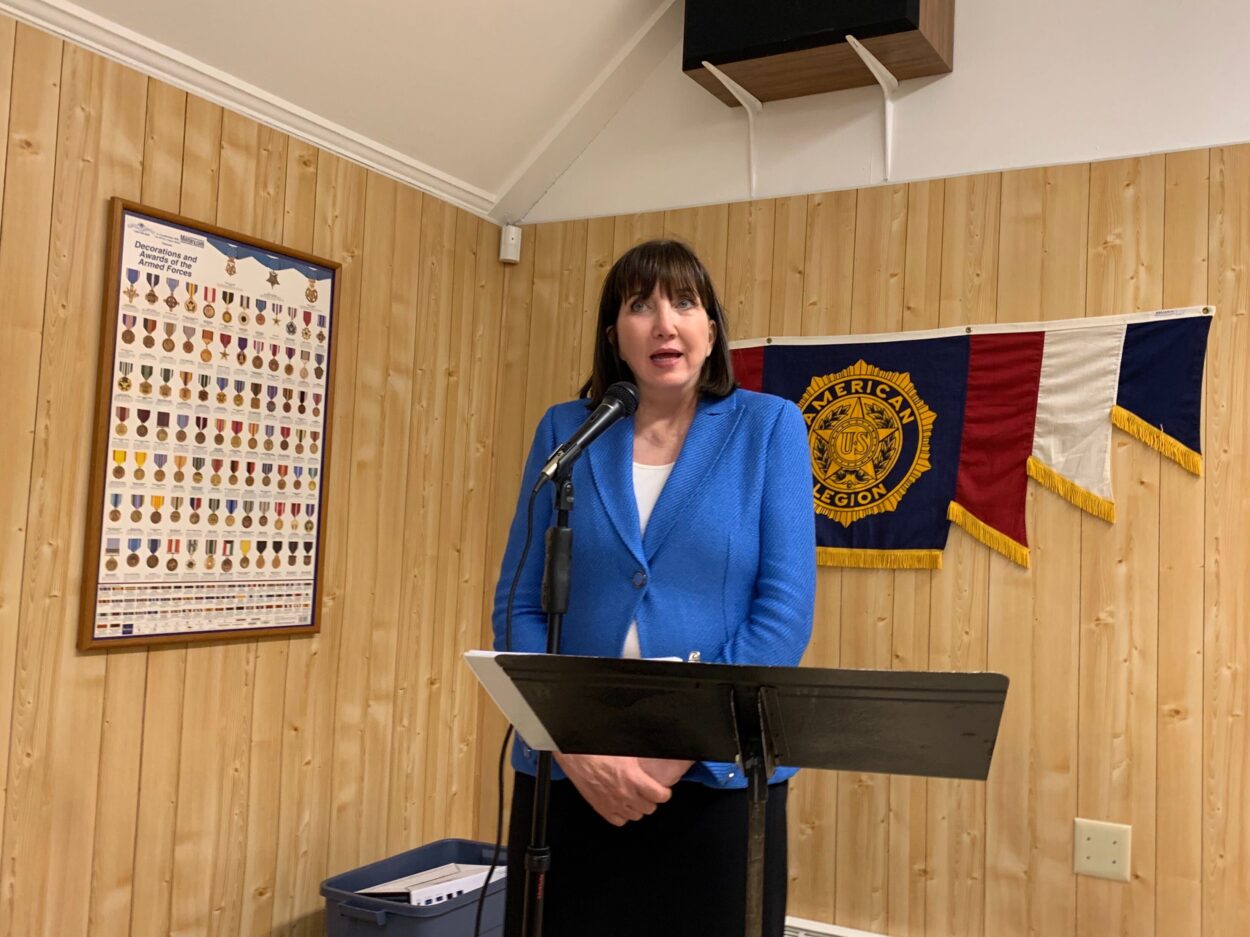 “If I’m elected president, my first official act will be to bring the troops home and turn America into one giant Switzerland: armed and neutral,” she said.

She said conflicts abroad — especially in the Middle East — have made Americans less safe. And she said Democratic nominee Joe Biden would continue to put U.S. troops in harm’s way.

Jorgensen pitched herself as an outsider — but she drew a distinction from President Donald Trump, who won the presidency without any experience in elected office. She says Trump hasn’t delivered on his anti-establishment message.

“And so I would say to everybody who voted for Trump last time, I’m the real outsider. So what you thought you were getting with Trump, you would get with me,” she said.

Jorgensen also met with marijuana and alcohol industry figures at a downtown Ketchikan dispensary to discuss the impact of federal policy on the two industries. She also met with voters at Ketchikan’s Bar Harbor Ale House.

Jorgensen’s chances in the general election don’t look promising: she’s polling well below the 15% threshold she would need to join the major presidential debates — though Jorgensen says that’s because pollsters aren’t offering voters a choice. Registered Libertarians make up only about 7,000 of Alaska’s roughly 590,000 registered voters.

It’s the first time in recent memory — and maybe the first time ever — that a presidential candidate has visited Ketchikan. The South Carolina resident said she’d enjoyed her trip through the 49th state.

“Oh my gosh, I love it. I would — if it weren’t so darn cold, I would move up here. One, one thing that I like about Alaska is how informal everybody is. Everybody is so down-to-earth,” she said.

The day Jorgensen swept through Ketchikan it was 70 degrees and — for once — sunny.

Faced with dozens of open jobs, Lower Kuskokwim schools look outside the U.S. for teachers